Born Covington, Kentucky, August 8, 1959.  Admitted to the Kentucky bar in 1984.  Admitted to the Ohio bar in 2010.  Admitted to the U.S. District Court, Eastern District of Kentucky and U.S. Court of Appeals, Sixth Circuit in 1985.  Education: Northern Kentucky University (B.A. 1981); Salmon P. Chase College of Law (J.D. 1984); Kentucky Mediation Institute (1999).  Robert began an active practice in 1984, with the law firm of Cetrulo & Cetrulo, focusing on insurance defense.  In 1991, he joined the firm of Ware, Bryson, West and Bartlett, as a partner, where he continued to specialize in workers compensation, general litigation, trial practice and insurance defense.  In 1999, he received additional training in the field of mediation and has served as a certified mediator, successfully resolving numerous cases throughout the state of Kentucky for the past nine years. Robert and his wife, Susanne formed their own law firm in 2001, Cetrulo and Mowery. Their firm focused on trial practice and litigation, with emphasis on personal injury defense, workers compensation and employment litigation. Robert was named as the most prolific trial attorney in the state in 2007 and 2014 by the Kentucky Trial Court Review. In the 10 years between 2005-2015, Robert was the top trial lawyer in the state for civil trial verdicts. Robert has handled the defense of cases for Norfolk Southern Railways for twenty years, successfully defending numerous crossing cases and FELA litigation. 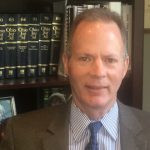